Transport innovation is no more about improved design and functionality. It is about an integrated and visionary long-term approach to the development of transport and infrastructure. In this article I will present some of the main on-going trends.

Our world is changing in an unbelievably fast pace. Urbanisation and the growing population of cities and regions puts a pressure and creates a new demand in the sphere of transportation. The present situation calls for the radical changes and complex problem solving approach to connectivity and infrastructure which will affect the future of transportation.

Additional burden on the environment created by the population growth and its increased mobility cannot be ignored either and has become an important factor to consider in the process of future transport systems development.

Transport-wise we don’t want to live in or travel to the choking environment off cities. Traffic levels are constantly increasing on the congested roads due to on going pressure for land development and commuting. Relying on new road construction and road improvements is not feasible anymore in the long run, as in the medium and longer-turn new road schemes generate even more traffic and bottle-necks.

Reducing the amount of traffic generated on the roads can be reached by applying smart complex solutions: encouraging staggered working hours, car sharing, initiatives like the “walking bus” (where children can walk to school in safety instead of being taken in their parents’ cars) and providing safe neighbourhood supervision. Next week we will look in details at this kind of complex project solutions in Freiburg, Germany. 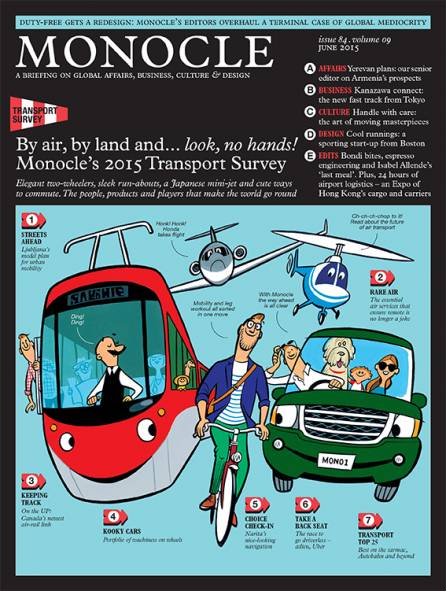 Nowadays transport systems need to be sustainable, convenient and yet economically feasible. To embrace all these factors requires a visionary endeavour and close collaboration of many public and private partners. City planners, local governments and businesses, civil society all need to have a mutual clear vision of how to move the development of transport and infrastructure forward in their place.

We have already mentioned several examples of successful public-private partnerships in the series of articles about multimodal transport developments. In this article we want to give a glimpse on the most recent ground-breaking transport innovations praised by the MONOCLE Transport Survey 2015/16.

Below is the example of SplashTours in Rotterdam, where a bus that is also a boat makes perfect sense, in the cities system of canals and harbour areas.

Traffic connection have a key role in the positive development of urban regions. Experience shows that a considerable element of traffic congestion is due to people commuting in and out of areas. Creating transit systems that reduce transport congestion and making it easy to switch between different modes of transport is an example of creative and sustainable approach to the development of public transport system, which will pay off in the future. Helsinki and Tallinn, the capitals of Finland and Estonia, are located 80 km far from each other and are separated by the Gulf of Finland. Every week thousand of people make the journey between two cities, by sea or by air. The concept of the new Helsinki project on construction of the railway tunnel between two cities, below the Gulf of Finland, was inspired by the success of the Oresund region project: the bridge between Malmo and Copenhagen meant a lot to both cities development and influence.

Today the trip by boat between Helsinki and Tallinn takes just under two hours and the new railway tunnel would take passengers across in 30 minutes. The tunnel construction, which will start in 15 years, has been already shown as feasible and will have the long-term effect on the increase of competitiveness of both countries.

First of all the project makes sense both economically and environmentally as has been proved by SWECO´s latest pre-feasibility study. Secondly, it will fit into the bigger railway international system” and will merge into the Rail Baltic, a planned railway route from Tallinn through the Baltic countries to Warsaw, creating a fast permanent link from Finland to Central and Southern Europe. This is the main value-added factor of the project. Additionally the tunnel will allow to better serve the Helsinki Vantaa International airport following an international trend in multimodal transport connections development.

The project will immensely benefit the entire EU and also aims to be a remarkable example of public private partnership political and financial cooperation.

Chosen as the European Green Capital in 2016, Ljubljana is focusing on increasing cycling levels to make itself a more liveable city.

Cycling nowadays can play a significant role in broader city infrastructure: it can ease the congestion on the roads, increase mobility among the population and also complement a rapid-transit system. Plus cycling brings direct and indirect advantages, as it is healthy, entertaining and creates an additional attraction factor for the touristic offer of the city.

Eight years ago the remarkable changes in Ljubljana’s transport system have come about through a shared vision of the citizen transport-advocacy groups and city authorities. A series of small improvement based on the vision of sustainable mobility as a “less stress and more fun”, lead to the significant impact. The historic centre of Ljubljana has been transformed into a place where transport means cycling, walking or hopping on a small electric shuttle called the Kavalir.

Since 2007 there has been an unbelievable 615% increase in the pedestrianisation of the city area. Bicycle-wise the city has 65 000 users of Bicike(LJ) bike-sharing system which is a great achievement considering that the city with 200 000 commuters. There are 5 park-and-ride facilities with 22 more to be installed by 2020.

Ljubljana has embraced technology in transport as well, with Urbana card being used for a broader scope of services: buses, park-and-ride systems, bicycle hire, car parks and even the city library. A special application turns smartphones in Urbana cards with the bonuses of real-time route planning and service information. There are 550 000 active uses of Urbana card in the city!

The local knowledge behind the technology has attracted international attention. The developers of bus-management system, is a Canadian company Telargo, which is selling its innovations globally.

While Ljubljana has been picking the best solutions in smart mobility from all over the world, the city took the processes creatively when in adopting them to the local conditions. The Bicicke(LJ) bike-sharing system is similar to the Parisian Velibe, it is developed by global company JC Decaux and implement by the local partner Europlakat. According to the numbers the system popularity outstripped the original with every bike in Ljubljana used on average 7 times a day compared to 5 in Paris. Price plays a significant role as an annual membership costs only 3 EURO and the first hour’s rent is for free.

Ljubljana”s experience in transport innovations has been praised internationally: it has won the European mobility award twice and, as earlier mentioned, next year the city will be the European Green Capital, based largely on its achievements in transport. Inspired by this success, Ljubljana is not resting on laurels and plans to have one third of its citizens cycling and walking by the year 2020.