There is a good deal of hubris in the way IBM has been talking about its new relationship with Apple. The alliance will no doubt warrant a mention in today’s Apple earnings call, which is expected to show strong results for the device to services giant. But this partnership looks vulnerable from the start.

In fact its very framing makes in vulnerable. In health care IBM believes the two companies are “better together”. They want to work towards some kind of standardization around iOS in health. As reported in Information Week:

“The deal on its own merits is a game changer, but in healthcare we can use the mobile environment to reach the consumer, the patient, the member — and back into the enterprise,” said Dan Pelino, general manager of IBM’s business with the public sector, including health systems.

The whole point about mobile is its disruptive nature. It forces us to rethink how work and services get done and by whom.

But there is an additional ingredient here. To succeed in healthcare the Apple IBM alliance needs a platform. Very few companies truly understand what modern business platforms are about or how to craft the strategy, technology and services mix.

Even Apple, king of the consumer platforms, has shown reluctance to build an enterprise platform offer.One big reason for that, according to The Register, is the continuing presence and dominance of Microsoft.

In healthcare a platform strategy would mean a platform that embraces usability and attraction for patient, physician, nurse, other care providers, insurer, hospital, and integration with third party data providers, open APIs for analytics companies and so on.

There is no reason to believe or presume that IBM has the skill or goodwill to create such a platform, and in such a way that people would flock to it. Platforms with a consumer-centric flair (think Uber and AirbnB) are unpredictable beasts but they generally rely on globalization for scale, a missing ingredient in health.

There is every reason to believe, though, that start -ups, like Mana Health, can go a long way to creating the health platform of the future and soon. Mana Health’s patient gateway portal is what IBM seems to be proposing. 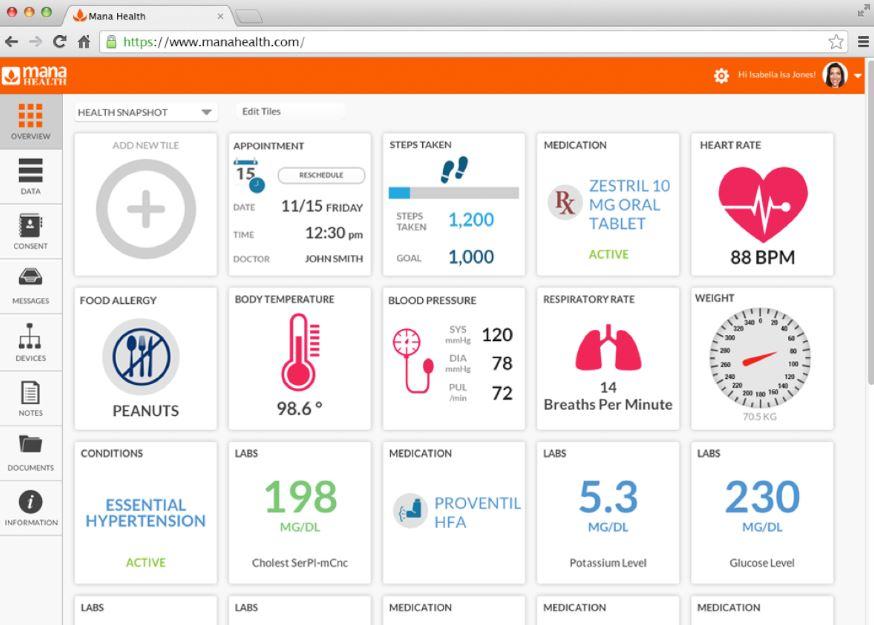 The team behind Mana Health has both life sciences and technology experience. Co-founder Chris Bradley majored in neuroscience and cell biology and went on from there to study computer science while partner Raj Amin, an engineer by background, was CEO/Co-Founder of HealthiNation, a health and wellness video company for consumer education, backed by Intel Capital.

Ok, so they have some creds but they are still just  start-up so how will they crack healthcare? They were both fortunate and prescient enough to win a recent competition to devise a new platform to connect New York’s 66,000 physicians, hospitals and care providers with the emerging world of patient-generated data. Their project glues together clinical and patient-generated data and provides an access point for patients.

Neither Chris nor Raj sees it as a device-led future.

“the future won’t necessarily be about winning on the device side, it will be about how you use the enormous amount of data that is being generated by people to describe themselves in new ways. Individuals will want help managing the data, providing access to their data and using it for custom applications that align to their specific needs. This is where healthcare industry players should focus their energy. How are you planning to plug in to this ecosystem?”

That has also led them, naturally, to a platform configured for apps developers.

There are a number of points it raises. IBM is deluded it if thinks it can standardize healthcare around iOS, even if 67% of healthcare professionals make use of an Apple device. The whole point about standards today is to make them device-neutral so that they are inclusive. The second delusion is to see this field as any less vulnerable to start-ups than less regulated areas of the economy. IBM cannot escape to safety by focusing on highly regulated fields.

The third is to think that the sheer scale of IBM is a defence. It can be but it needs careful marshalling of resources. Last weekend I was with the good folks from Ericsson, the telecoms infrastructure company at the Ericsson Media Summit (transparency statement – fare and hotel paid by Ericsson).

Ericsson has created a global infrastructure for mobile money that could move the balance of power away from banks to telecoms operators. When I asked how big is the team that developed the new mobile money platform I was surprised by the answer. Maybe I shouldn’t have been. It numbers about 200 people.

What Ericsson is attempting to do is use its global presence to create services that are global by nature (money transfer) and that will  benefit from a hosting platform that has worked out regulatory deals with each geography. It is unlikely that those conditions will apply in healthcare.

There’s no doubt that IBM will play a role in the reconfiguration of healthcare but the story it is telling around Apple simply doesn’t reflect the narrative of modern business. IBM will play a bit role because smaller entities have as many advantages as old Big Blue. But even companies like Mana Health may not hit the same highs as an Uber or AirBnB

There is no long tail to stitch together in health, no hidden or under-served community searching a new service supplier. This could end up being old-fashioned portal activity. It could be a long road to success and scale. Does IBM have the time or patience?