This week, Stuart Jeffrey, an analyst with Nomura Securities, was quoted by Wall Street Journal as saying “The s-curve for Apple is coming to the flattening part. How do you tackle it?”.

This blog post is about what it means when the s-curve flattens, and what can be done about it.

The second coming of Apple

In the late 1970s, Apple was one of the founding companies of the personal computer revolution. The company sold four million Apple II computers. For more than two decades, Apple Computer was predominantly a manufacturer of personal computers, including the Apple II, Macintosh, and Power Mac lines.

Then Apple faced rocky sales and a low market share during the 1990s. As a consequence as we all know, Steve Jobs, who had been ousted from the company in 1985, was invited back to Apple in 1996. To get Apple back to success, Jobs created a new corporate philosophy of recognizable products and simple design, starting with the iMac in 1998 and culminating with the launch of the iPad three years ago.

In the recent decade, Apple is the number one corporate success story and it became one of the greatest innovative companies, as Apple has consistently delivered disruptive consumer technologies to the market, including the iMac, the iPod, iTunes and the AppStore, the iPhone and the iPad. However there has been growing concern about Apple recently and the stock price is down 30% since its peak in September 2012.

On January 23rd, Apple posted its earnings for the final quarter of 2012, which was ‘disappointingly’ one of the largest corporate earnings for a  quarter in history. Apple’s $13.1 billion in earnings this quarter was the fourth largest of all time, following three higher quarter earnings previously posted by Exxon Mobil Corp. Still, it was below expectations. The lower-than-expected growth in profits caused many investors to panic and the sell-off this week has put Apple a hair’s-breadth away from losing its status as the world’s highest valued company. At Thursday’s close, it was worth $423 billion, just 1.6 per cent more than No. 2 Exxon Mobil Corp.

The plunge was set off Apple’s quarterly earnings report late Wednesday, which suggested the company’s nearly decade-long growth spurt is slowing drastically. Below is a graph illustrating the Apple stock price during the previous 20 years. 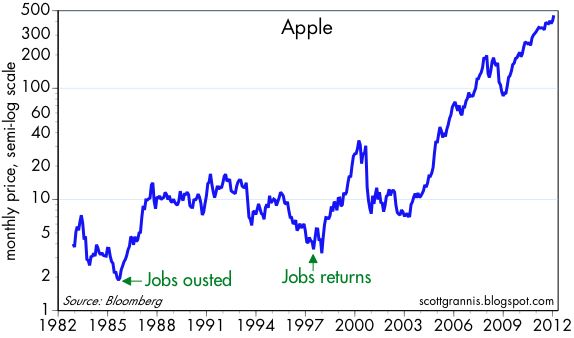 What can Apple do to boost its stock? Analysts say it may not be able to win back the investors who bought the stock on the way up. They will be chasing the next hot stock. But the company can make itself appealing to new investors by doing what Wall Street wants and handing out more of its massive cash pile in the form of dividends and stock buybacks.

To be sure, Apple products have not lost their appeal. In interviews yesterday, Apple CEO Tim Cook said the company could not make enough iPhones, iPad´s and iMacs in the fourth quarter to satisfy demand, so the appeal of Apple’s products is intact. The problem is rather that Apple hasn’t launched a revolutionary new product since the iPad in 2010.

Returning to Nomura Securities analyst Stuart Jeffrey, in the interview with Wall Street Journal he continued to say: “The company is at a bit of a crossroads. It’s gone from launching big hit products where they didn’t have to look at the competitive landscape — they just did their own thing — and the growth meant they didn’t have to focus on the whims of Wall Street.”

From economic trends, population growth, the spread of cancer, or the adoption of new technology, certain patterns inevitably seem to emerge. A new technology product, for example, begins with slow acceptance, followed by explosive growth, only to level off before becoming replaced by something new. The familiar pattern is often called the S-curve.

The S-curve emerged as a mathematical model and was afterwards applied to a variety of fields including physics, biology and economics. It describes for example the diffusion of viruses, economic growth in developing economies, the utility gained by people as the number of consumption choices increases, and so on.

In innovation management the S-curve illustrates the introduction, growth and maturity of innovations as well as the technological cycles that most industries experience.

In the early stages large amounts of money, effort and other resources are expended on the new innovation but small performance improvements are observed. Then, as the knowledge about the innovation accumulates, progress becomes more rapid.

As soon as major obstacles are overcome and the innovation reaches a certain adoption level an exponential growth will take place. During this phase relatively small increments of effort and resources will result in large performance gains. Finally, as the technology starts to approach its physical limit, further pushing the performance becomes increasingly difficult, as the figure below shows.

S-curves visually shows how a product, service, technology or business progresses and evolves over time. S-curves can be viewed on an incremental level to map product evolutions and opportunities, or on a macro scale to describe the evolution of businesses and industries. Some industries and technologies move along S-curves faster than others. High tech S-curves tend to cycle more quickly while certain consumer products move more slowly.

Essentially, the S-curve can also be seen as the pattern of revenue growth common to all successful companies. They start small with a good product and a small client base. Then revenue grows rapidly as demand increases and eventually peaks and levels off as the market matures. That is the end of most businesses.

Research shows that once companies hit a revenue peak, a stall, they rarely ever return to rapid growth.

On a product, service, or technology level, S-curves are usually connected to market adoption since the beginning of a curve relates to the birth of a new market opportunity, while the end of the curve represents the death, or obsolescence of the product, service, or technology in the market. Usually the end of one S-curve marks the emergence of a new S-curve – the one that displaces it. For example video cassette tapes were replaced by DVDs, which are being replaced by Blu-ray.

So, if the S-curve for Apple is coming to its flattening part, as Stuart Jeffrey´s says, what can Apple do about it?

What can be done at the flat section of the S-curve?

One obvious trait of continuously successful companies is that they are all good at launching new products, i.e. climbing the S-curve, in reference how revenues for a successful new product typically build slowly, then ascend rapidly as the offering catches on, and finally tapers off.

But what’s not so obvious is what high performers do before and during that climb. So what should Apple do? Well, we can look at many other industries to see what have allowed companies to jump to a new S-curve.

Consider Cray Inc., in the the supercomputer industry, where the traditional architecture involved single microprocessors. In the early stages of this technology a huge amount of money was spent in research and development, and it required several years to produce the first commercial prototype.

Once the technology reached a certain level of development the know-how and expertise behind supercomputers started to spread, boosting dramatically the speed at which those systems evolved. After some time, however, microprocessors started to yield lower and lower performance gains for a given time/effort span, suggesting that the technology was close to its physical limit (based on the ability to squeeze transistors in the silicon wafer).

In order to solve the problem supercomputer producers adopted a new innovative architecture composed of many microprocessors working in parallel. This innovation created a new S-curve, shifted to the right of the original one, with a higher performance limit (based instead on the capacity to co-ordinate the work of the single processors).

So, the trick lies in not only traversing the S-curve upwards, but in jumping, shifting it to a new pattern using innovation.

Another example is HTC, a Swedish company working with technology to grind floors extremely smooth. Over 20 years they have become the market leader for floor grinding machines, appreciated by thousands of customers all over the world.

As the company hit the flattening part of the S-curve, they developed new products to satisfy new customer segments, such as the Twister, a  revolutionary floor cleaning system consisting of floor pads prepared with billion of microscopic diamonds which clean and polish the floor mechanically instead of using chemicals, and with this new product line making a shift to a new S-curve.

HTC´s decision to develop a new product for a new customer segment allows the business to continue to profit from the old S-curve for the current product line and at the same time use the competitive advantage from the company´s core technology to move into growth in a new product segment toward a new set of customers. By doing so HTC uses its unique know-how to disrupt the old technology of cleaning floors.

The art of jumping the S-curve

True high-performance companies manages to jump the S-curve, not just once but repeatedly. To be a real high performer, it’s not enough to simply win. You have to win big; so big, in fact, that the market knows immediately that you are playing in a different league to your competitors

So how do the genuine high-performers avoid stalling? By moving on. Before they reach the top of one S-curve, they’re already preparing to jump to the start of the next S-curve. They make the leap to another successful business, and they do this repeatedly. What this amounts to is not just disruptive innovation, but recurring disruptive innovation, the ability to achieve it repeatedly.

The truly innovative companies are able to create whole new playing fields, with themselves as the leading players. This may sound simple, yet why are so many companies feeling the hyper competition without making something about it? Why are the vast majority failing to achieve this jump?

One of the secrets lies in understanding three hidden warning systems: the competitors performance, the company´s capabilities and the company´s pool of talents, all of which mature and decline much faster than a company’s financial performance. What they are, in fact, is an early warning system, signalling the time to prepare for the jump to the next S-curve.

What this boils down to is that truly innovative companies plan and manage their S-curves pro-actively. And they pull off this balancing act by creating an innovation-centric culture and strategy. They make innovation a permanent process, rather than a one-off event.

These companies also refresh their corporate leadership well before it is necessary, and they make themselves hothouses of talent, ensuring they have the talent needed to drive the next growth phase, or the climb up the next S-curve.

Even in the best of circumstances, the eventual shape of a company’s S-curve is unpredictable. Sales may be exploding one day, only to collapse the next when a competitor introduces a new offering. Indeed, on the horizon today is continued globalisation and increasing hyper competition, developments requiring jumping to a new S-curve even more critical, and difficult, in nearly every industry.

The bottom line is, a strategy focused mainly on retrenchment during tough economic times is a strategy for continued trouble during the recovery. And even during a period of recovery, companies can’t become complacent. Crises are a regular fixture of business life, and executives will need to focus on leaping from their existing S-curve pro-actively, sooner than it becomes a must.

For Apple this means the company needs to utilize its innovation culture and follow from Steve Jobs vision of repetitive disruptive innovation. It cannot stop and optimize for profits, as it seems the company is doing right now. Instead it must push on and bring its innovation talent to new areas of consumer and B2B products, and once more jump the S-curve.